Your email has been added to our email list. Stay Tuned!

From magazine covers to personal projects, photographers discuss the transparency and power of revealing the studio backdrop in a photograph.

While on a FaceTime call with Billy Porter to discuss ideas for the cover shoot for the May 19th issue of The Hollywood Reporter, Brooklyn-based photographer Lia Clay Miller remembers the actor giving the perfect prompt with the words, “Diana Ross, bitch!”

Although there are countless portraits of the diva burned into public consciousness, Miller immediately lit upon Victor Skrebneski’s iconic black and white portrait, Diana Ross-Diptych, Singer and Actor, 25 January 1977, Chicago Studio. Donning a slinky gown with a voluminous fur draping down to the ground, Ross stands underneath a visible studio light that reveals the very studio in which the portrait is made.

By exposing the set, Skrebneski brings the viewer inside the photograph. Although we are observers and not participants, he breaks through the fourth wall, making us feel like we are insiders, on set, sharing the moment. The impact was palpable, and inspiring. “I’d never seen images of Diana like this before,” says Miller. “It lent to the idea of who she was: powerful yet subdued and secure in a beautiful way. There’s always a balancing act with subject and environment. They need to meet and feel a part of the same world but they can also help resolve one another, too.”

“The studio is a blank canvas for creativity,” adds New Zealand-born, New York-based photographer Emily Hlavac Green. “You can throw light around, explore backgrounds and textures and build a narrative as you desire.” Invariably, that desire led early 20th century photographers to create a pristine, unadulterated space — much like the white cube introduced to present and sell art.

Although the origins of the seamless paper backdrop are unclear, it quickly became the industry standard, revolutionizing studio photography and modernizing the look and feel of commercial work.

From advertising to editorial, portraiture to fashion, food to table top, the seamless liberates the subject from its setting so that the photographer can hone formal and expressive aspects of the image with exquisite nuance. Devoid of context, the viewer can endlessly contemplate the interior life of a person in a seemingly “objective” state.

Yet photography, like every other form of art, is a construction — a fact that may get lost in its ability to capture life as it unfolds with an accuracy that appeals to our profound desire for truth. This can heighten our desire to take things on face value, securing in the knowledge that “seeing is believing” even if we are only looking at the scene through someone else’s eyes.

“I don’t really believe in truth in photographs, but the seamless is a way to portray ‘truth,’” says Miller. “The seamless eliminates outside phenomenon, directing the viewer into this one dimensional space that lends to the idea of heightened understanding of the subject. It gives the subject a liminal space that helps focus whatever the photographer is trying to achieve.”

The seamless can take on elements of character and help set the mood through the use of color, while keeping the viewer focused on the subject. “Seamless sets are one of the easiest and quickest ways to draw focus attention in a photograph: what you place in front of it is what you see,” says Taiwan-born, Los Angeles and San Francisco-based photographer Jessica Chou.

“Stripped away of distractions, idea or story in front of the camera very clear and intentional. But on the flip side of that, this is also where things get static — where you lose spontaneity, the charm and happenstance of everyday life to help carry and move the story forward.”

Indeed, the success of an image may be found in the sense of balance being a precarious state — the photograph as a fleeting moment of perfection in an imperfect world. But for all its advantages, the seamless can become mundane, repetitive or even cliché, amplifying the controlled environment of the photo studio. Without a feeling of tension, the image becomes humdrum, just another unremarkable scene.

Revealing the constructed elements of photography isn’t necessarily a new concept. In 1909, Imogen Cunningham made Self-Portrait in 1863 Costume in her studio. Posing as one might have done when studio photography became widely accessible, Cunningham used a painting easel with a large blank canvas as her backdrop, prefiguring the effect of the seamless in erasing the background. She pushes it one step further, revealing the top and right sides of the canvas, subtly reminding viewers that she is simply playing a role for the camera.

“It’s photography about photography!” says Philippines-born, Seattle-based Chona Kasinger. “Personally, I like the deconstructed look and approachable, realistic vibe of the seamless ‘reveal.’ Although it can run the risk of being overused, it can be utilized in a way that’s refreshingly candid, tongue in cheek, and doesn’t take itself too seriously. It peels back the layers a little bit and acknowledges the space between the person both behind and in front of the camera.”

This acts a frame a way to guide the viewer through the story while avoiding stale clichés that often arise as a result of formulaic approaches to commercial work. Kasinger got her start photographing live musicians and quickly realized a need to “break beyond the standard issue band in front of a tarp or picket fence backstage at a festival.” With white seamless and gaff tape, she could do just that, discovering ways to strike the perfect balance between formal and environmental portraits while photographing in the field.

“I don’t photograph portraits in the studio often,” Kasinger explains. “When it’s possible, I work in a space familiar to the subject and tailor my setup accordingly. I am drawn to making portraits with an environmental context — it often sets the subject more at ease and it also gives me an opportunity to learn a little more about them. During the pandemic, I spent a lot of time photographing around people’s homes and neighborhoods. Occasionally, I’ll tote along a seamless, but more often than not will utilize what’s available. [Revealing the seamless] can be an impactful, unique, and fun way to contextualize the moment, time and place.” 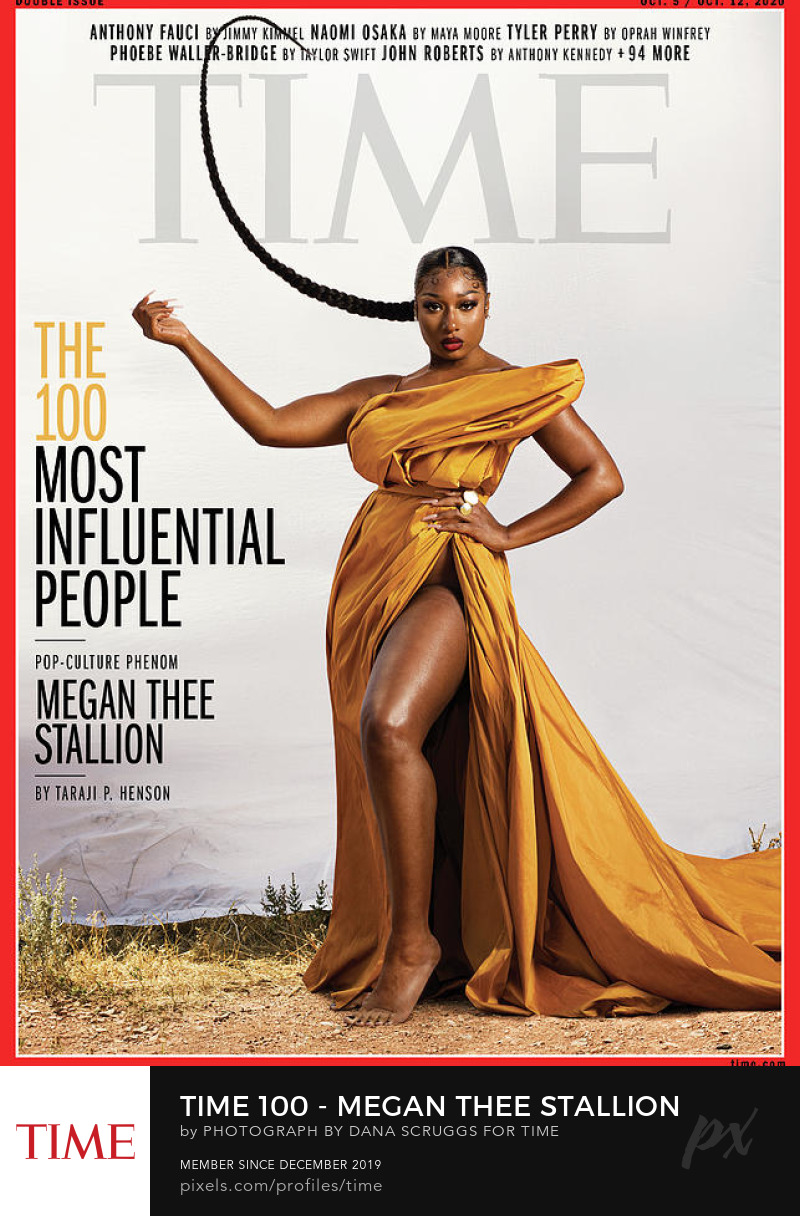 Indeed, this can be seen in Dana Scruggs’ portrait of Megan Thee Stallion for the October 5, 2020, double issue of TIME’s 100 Most Influential People issue. Wearing a gold gown trailing along the ground, Megan whips her long braid through the air. Shot outdoors, the white seamless reaches the ground, where we see Megan standing barefoot on the earth.

The image evokes the spirit of fellow Houston icon Beyoncé — photographed by Tyler Mitchell for the cover of the September 2018 issue of Vogue. The historic cover was country at its very best, using white fabric as seamless, natural light, floral crown, and minimal make up to convey a feeling of beauty and purity. The photograph has lasting impact, cited by Luupe photographers Emily Hlavac Green and Kat Contreras as influential.

“[The seamless reveal] helps expose the artifice of the photographic image,” says Green. “It speaks to the very nature of photography itself which abstracts a moment in time and removes it from reality. It reminds you that as photographers we hold a power to make an image, and not just take it.”

It’s something Jessica Chou also understands well. Although she grew up in Los Angeles, it wasn’t until she began photographing A-list celebrities behind the scenes on L’oréal commercials that she began to see how “the real and the “unreal” become integrated with one another.” Rendering the seamless visible became a way to alternately amplify or demystify the magic of the set. By revealing the seamless, we may consider the elements of staging, interpretation, and negotiation within the frame.

“I think it plays into our sense of truth and who owns the story we are telling. Is it the person in the photograph, the photographer, or the viewer?” says Chou, asking all the right questions. “To me, it’s like a lot of fragmented pieces placed together, where we can accept multiple perspectives at once and still feel like a whole.”

For Chou, photographers like Endia Beal (above), Camila Falquez, Djeneba Aduayom, and Julia Noni are using the seamless reveal to examine social consciousness and explore the ways our built environment influences our narrative and identity.

“In 2021, we’re still trying to come to terms with 2020 and the insanity of it all,” says Chou. “And quite frankly, we’re still very much in it. But we’re ready for an escape that can still respect our shared experience. The boundaries have been blurred and nobody is fooling anybody. I think we can celebrate our lives while still staying in the truth.”

Miss Rosen is a New York-based writer focusing on art, photography, and culture. Her work has been published in books, magazines, and websites including Time, Vogue, Artsy, and Aperture, among others.